You are here: Home / Stumptown Swing 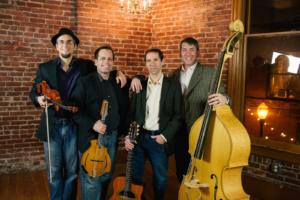 Named after their hometown, Portland “Stumptown” Oregon, the quartet is closely associated with the network of Lindy Hop, Balboa and Swing Dance clubs that have made Portland a major center of the Swing Dance revival.  They are in demand as a live band for the almost nightly swing dance events throughout Portland.  In addition to Stumptown’s thumping dance-oriented set, the group frequently performs a concert set featuring a wider variety of tempos and styles, appearing at both jazz and world music festivals.

Stumptown Swing released its debut album in 2014 and has been performing on concert stages and dancehalls throughout the Pacific Northwest.  They are available for both private events and concert series – please sign the mailing list to hear about future shows, or contact us to book your own Stumptown Swing event.

Schedule will be available soon! Check back.