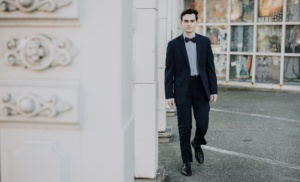 Shaymus Hanlin Quartet based out of Portland, Oregon. Hanlin, growing up with the American Songbook in his heart, he fell in love with the music and began performing at age 13. Hanlin has appeared with many great musicians and performers such as Phat Cat Swinger, Yve Evans, Dave Bennett, Terry Myers, and The Glenn Miller Orchestra. Having been introduced to the music festival circuit at a young age with the Oregon Coast Lab Band, and Bay City Swing, he has made many friends and mentors in the music business. Notable performances include appearances at the Sun Valley Jazz & Music Festival, Sacramento Hot Jazz Jubilee, Fresno Dixieland and Mardi Gras Festival, Glenn Miller Orchestra tour throughout Mexico, invited to New Orleans Jazz and Heritage Festival (Jazz Fest) with Banu Gibson, and our National Anthem at the Moda Center. Shaymus and his Quartet released their debut album on February 5th, 2021!

Schedule will be available soon! Check back